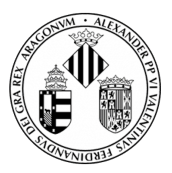 The Estudi General de València (UVEG) (www.uv.es) was founded in 1499, and today is one of the most outstanding Spanish universities in both national and international rankings, which is among the top 300 in the world, the top 200 in Europe and the top 10 in Spain as per ARWU “Shanghai” Ranking. Regarding scientific production, National Taiwan University Ranking – NTU shows a position of 3 in Spain, 83 in Europe and 207 in the world. Currently, the UVEG stands out as one of the main public research organisations in Spain, with more than 3000 researchers integrated in 84 departments, 21 institutes and 5 other research units, belonging to social, biomedical, human, experimental and formal sciences. The UVEG counts on a network of research institutes (of its own or joint centres with other organisms), a unit for European and International research projects within its Research and Innovation Service, and several central services within the reach of the scientific community, the institutions and the industry. In fact, the UVEG is participating in several European projects under the subsequent RTD European Framework Programmes (I to VIII) and other European programmes (Erasmus, Leonardo, Life+, Cost, Third Health Programme, EEA Grants, Daphne III, Creative Europe) acting as several roles (i.e., coordinator, contractor, associated contractor, member, host institution, etc.), and having
experience in the development and management of 519 European and international projects as a whole. The UVEG participated in 78 community actions financed under the VII Framework Programme (Coordination and Support Actions, Collaborative Projects, Marie Sklodowska-Curie Actions, ERC Advanced and Starting grants, etc.) amounting to  23.844.145 euros, with the role of coordinator in 29 of them. So far we have been awarded with 75 projects under Horizon 2020, with the role of coordinator in 33 of them. Currently, we are taking part in 62 projects under European framework programmes and in 37 projects under several European Programmes other than framework ones, which makes up a total of 99 ongoing community actions. The UVEG takes part in VLC/Campus, an action that has been distinguished as a Campus of International Excellence, a stamp of quality awarded by the Spanish Ministry for Science and Innovation, aimed at becoming a hub of knowledge of international excellence, through specialisation of scientific-technological production in health, communication and sustainability. Recently, the HR Excellence Research Award was obtained, as the Human Resources Strategy for Researchers (HRS4R) recognised UVEG as having implemented the European Charter for Researchers and the Code of Conduct for the Recruitment of Researchers. Labpsitec-Valencia (www.labpsitec.es) is a research lab, which is an international reference on the research of Information and Communication Technologies (ICT) applications in clinical and health psychology. The team is pioneer worldwide in using ICT solutions for improving health and wellbeing, as Virtual Reality, Augmented Reality, Internet and mobile devices. We have developed technological applications that have shown innovation and progress in the field of Clinical and Health Psychology having a significant socioeconomic impact. It has also made contributions related to the transfer of knowledge within the framework of research contracts with public and private companies and foundations, so that the results of research focus on social needs. The team is a component of the Spanish Biomedical Research Centre in Physiopathology of Obesity and Nutrition CIBERObn, who gathers 33 investigation groups of excellence from different Spanish Hospitals, Universities and Research Centres, focused on nutrition and healthy lifestyles. We have been involved in several European projects focused on developing and testing ICT solutions for health and wellbeing (VEPSYUPDATED, PASSION, EMMA, OPTIMI, EDUCARE, ANGELS, L2L, T3, E-COMPARED, MEAL, ICARE, etc.)

In accordance with the current EU data protection laws, please take a minute to review the term & conditions for using our services. Our terms describe how we use data and the options available to you.

In accordance with the current EU data protection laws, please take a minute to review the term & conditions for using our services. Our terms describe how we use data and the options available to you.